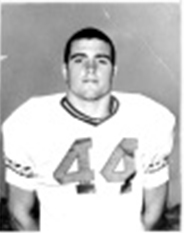 Jim Walsh was a three year varsity football starter, and a two year all-star. He was also a three time individual champion (shotput and discus) on two championship football team. He was team captain, All City, All CAL, and All Northern California, and All Metropolitan.

Jim Walsh was considered by most to be the finest Riordan, and San Francisco, athlete of the second half of the 1960’s. He was inducted into the Riordan High School Hall of Fame in 1977, and again in 2006 with the 1966 championship team. Jim was the 1968 recipient of the Tom McMann Award, emblematic of San Francisco’s finest high school football player, who also excelled in scholastics and sportsmanship. In the summer of 1968, Jim played in the North-south Shrine in the Los Angeles Coliseum. Selection to this game was reserved for the twenty five best football players in Northern California.