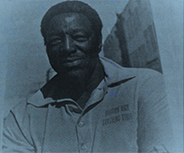 Coach McNealy was successful in other sports also. He coached football and track throughout his tenure at Mission. Under his lead, the Mission track teams of the mid-1960s were highly successful.