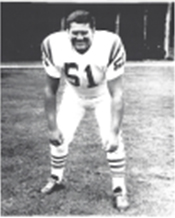 Listed at just 5’10” tall and 178 pounds, Drucker developed into a dominating lineman on both sides of the ball for St. Ignatius helping lead the Wildcats to two AAA Round Robin Championships, in 1959 & 1960. In 1960, the Drucker led defense gave up just 442 yards in 9 games. Drucker was named both AAA & Northern California Lineman of the year in 1960. The following summer, Dennis was also one of just two players from San Francisco, selected to play in the North vs. South Shrine Football game at the Los Angeles Coliseum. His efforts on defense, helped shut out the South offense and win the game for the North. Dennis would go on to star at both CCSF & SF State.

Two years before Dennis achieved fame and notoriety for his football talents he had already accomplished a feat on the golf course that has never been matched! As a freshman at St. Ignatius, and just 14 years old at the time, Dennis entered and became the youngest winner of the 1958 Northern California Junior Golf Championship! In doing so, in this 18 year old event, Dennis beat the defending champion in the final of two matches on the same final day, winning on the very last hole in a wonderful example of calm nerves, determination & skill. Dennis would go on to star for the golf teams at both CCSF & SF State.